A final before passing the baton to kovac 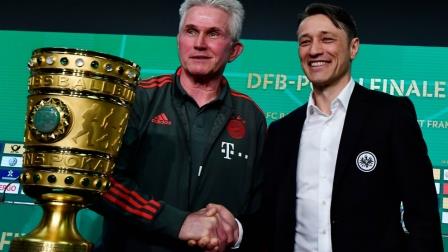 Attack meets defence and the past meets the future on Saturday night in Berlin as Bayern Munich face Eintracht Frankfurt for the DFB-Pokal final.

With Niko Kovac taking over from Jupp Heynckes in the summer, the former Croatia international is hoping to bow out from his current club with a trophy having witnessed something of a collapse in their Bundesliga form since his announcement as the next coach at Bayern.

However 73-year-old Heynckes won't make things easy for his successor in his final game in management. Having already retired once and stated that he definitely won't be returning to the dugout again, the German is hoping to bid farewell with a domestic double.

He will do so without Jerome Boateng, Arjen Robben or Arturo Vidal but Thomas Muller is set to be fit to start after stomach issues during the week, and all eyes will be on whether Manuel Neuer is selected for his comeback after several months out.

With the Bundesliga already won, perhaps Munich will approach this as more of an occasion for Heynckes than anything else, which should serve as motivation enough for a team at ease with winning these sort of finals.

But motivation should also come easy to Kovac, who lost the cup final 2-1 to Borussia Dortmund just 12 months ago and has his Eintracht side incredibly organised, so much so that they've only conceded once during the Pokal campaign.

Frankfurt haven't beaten Die Roten since 2010 and yet this remains an intriguing final as silverware and legacies are on the line in both coaches' final acts at their beloved clubs.