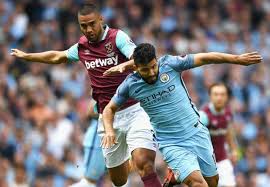 The Argentine's foul on the centre-back was missed by referee Andre Marriner, and a retrospective suspension would see him miss the Manchester derby next month
Manchester City striker Sergio Aguero could face a ban from the Football Association after elbowing West Ham defender Winston Reid.
Television replays showed the Argentina international aiming his arm towards the centre-back during Sunday's Premier League clash at the Etihad Stadium, though referee Andre Marriner missed the incident.
And the FA could now look to suspend the forward retrospectively once the evidence is reviewed from the match.
A suspension would see Aguero miss the derby with Manchester United on September 10, as well as potentially the Premier League clash with Bournemouth and the EFL Cup third round tie at Swansea City.