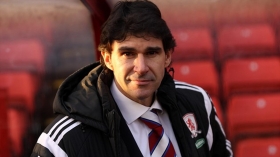 Sam Allardyce has included John Stones in his first England team Sam Allardyce has made only three changes to the England team that lost 2-1 to Iceland at Euro 2016 for his first match against Slovakia on Sunday. John Stones, Jordan Henderson and Adam Lallana are included in Allardyce's first starting line-up as England manager, with Chris Smalling, Daniel Sturridge and Dele Alli dropped from the side that were defeated by Iceland in June.  Joe Hart, who left Manchester City on Deadline Day to join Serie A side Torino on a season-long loan, keeps his place in goal for England's opening 2018 World Cup qualifier and will win his 64th cap in Trnava.
Stones will partner Gary Cahill in central defence, with Kyle Walker and Danny Rose retaining their places at right-back and left-back respectively.  Eric Dier anchors the England midfield alongside Henderson at the Stadion Antona Malatinskeho, with captain Wayne Rooney, who will become the Three Lions' most capped outfield player, deployed in an attacking role behind lone forward Harry Kane.  Jordan Henderson will start in midfield for England against Slovakia Raheem Sterling and Lallana complete Allardyce's first XI, and will be tasked with providing width against Slovakia.
Ahead of the match, Lallana said: "We definitely need to win on Sunday. We put the most pressure on ourselves to win games.  Allardyce has deployed captain Wayne Rooney (centre) in an attacking role behind Harry Kane (right). "We know we are a very talented group of lads and it's been important to get some good training in this week." Dier added: "It will be a completely different game to the one at the Euros. We'll be a different team with a different manager. You can't compare the two games." England team to face Slovakia (4-2-3-1): Hart; Walker, Cahill, Stones, Rose; Dier, Henderson; Lallana, Rooney, Sterling; Kane.