ARSENAL AGREE DEALS TO SIGN PEREZ & MUSTAFI FOR OVER £50M 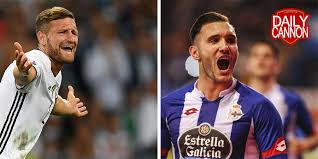 Arsenal have agreed deals to sign Deportivo striker Lucas Perez and Valencia defender Shkodran Mustafi and expect both players to undergo a medical on Friday, Goal understands.
Gunners officials have been working throughout the summer in a bid to strengthen an injury-ravaged defence and limited forward line and an agreement has finally been reached to bring in two of La Liga's top performers last season.
Perez, 27, scored 17 league goals in 2015-16 and was scouted several times by Arsenal, who originally opted to bid for Jamie Vardy instead. The Leicester striker subsequently rejected a move to the Emirates Stadium, signing a new contract with the Foxes and leaving Arsene Wenger to work on other targets.