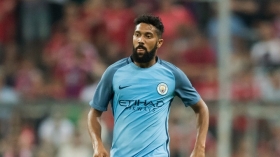 Christian Atsu featured for Chelsea in pre-season Newcastle have agreed a deal with Chelsea to take winger Christian Atsu on a season-long loan, according to Sky sources. The loan deal also includes an option to buy the 24-year-old Ghana international outright at the end of the loan spell.
Atsu signed for Chelsea in a £3.5m deal from Porto in 2013 but is yet to make a first-team appearance for the Blues. Antonio Conte says he is still looking in a 'crazy' transfer market The winger has been loaned out in each of his three seasons since signing a five-year contract at Stamford Bridge. Atsu joined Chelsea's affiliate Vitesse Arnhem in 2013-14, Everton in 2014-15 and both Bournemouth and Malaga last season.
He has 42 caps for Ghana, where he began his career with Feyenoord Fetteh before joining Porto's academy in 2009. Meanwhile, Newcastle midfielder Cheik Tiote, who has been pictured in Istanbul, is understood to be close to a move to Galatasaray.