Barcelona star close in on Serie A move 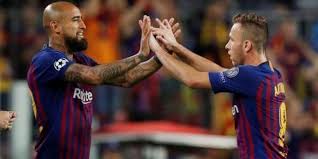 Inter are reportedly closing in on the signing of Arturo Vidal from Barcelona.
An agreement between both clubs is close to being reached, with the deal potentially bringing down the cost of Lautaro Martinez's switch to the Camp Nou.
According to la Cuarta, the final hurdle that needs to be cleared in order for Vidal to become an Inter player is his salary.
The Chilean is reportedly demanding 13 million euros a year - the same amount that he earned at Bayern Munich.
Inter's highest paid player in their current squad is Romelu Lukaku, who earns 12m euros a year.
La Cuarta have said that Vidal and Inter boss Antonio Conte have been in touch and have held positive talks over the phone in recent weeks.
Vidal is continuing his individual training routine with Barcelona ahead of a return to action for LaLiga.