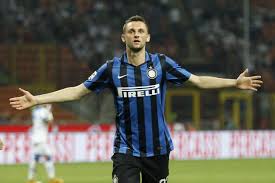 Marcelo Brozovic's agent claims Chelsea and Arsenal are trying to bring the Inter midfielder to the Premier League.
With Gabriel 'Gabigol' Barbosa and Joao Mario about to join the Serie A side, they are reportedly open to selling Brozovic to raise funds.
The Croatia international's representative, Miroslav Bicanic, said the 23-year-old has plenty of choices before the close of the transfer window.
"It's true, there are many options and we are talking about some big European clubs," Bicanic told Index in Croatia.
"I heard that Chelsea representatives are in Milan and that Arsenal are also prepared to sign him.
"Inter are pushing to sell to one of these two clubs who are prepared to pay a sum that satisfies all concerned.
"However, I am currently in Zagreb and there's plenty of time before transfer deadline day.
"The matter is not so urgent and until Marcelo signs a contract with another club, he remains an Inter player."
Brozovic came on as a substitute in Inter's 2-0 defeat to Chievo in their first Serie A game of the season. He made 32 league appearances for the Nerazzurri last term.