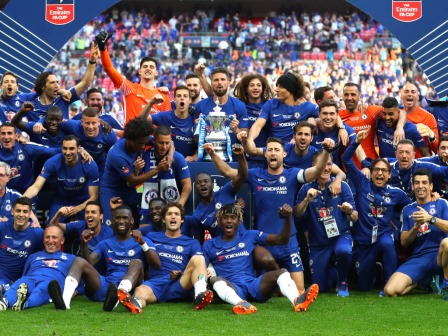 Antonio Conte's tumultuous second season in charge of Chelsea came to a victorious end at Wembley on Saturday with a 1-0 victory in the FA Cup final over Manchester United.

Despite being the favourites prior to kick off, Jose Mourinho's charges were rocked by the news that Romelu Lukaku wouldn't be available to start courtesy of an injury picked up against Arsenal in a Premier League match.

United controlled much of the early possession and would have been forgiven for feeling as if they were in control, yet after 22 minutes of play, a moment of individual brilliance from Eden Hazard settled the contest.

A lofted pass out of defence found the Belgian one-on-one against Phil Jones just inside United's half and a simply sublime first touch saw him ghost past the England international and into the penalty area.

Jones couldn't keep pace with the former Lille star and attempted a last-ditch sliding tackle, one which Michael Oliver had no hesitation in awarding a penalty for.

Hazard stepped up coolly and set David de Gea the wrong way before putting the ball into the bottom left side of the net.

From there it was always going to be an uphill battle for Manchester United given just how negative both sides were set up.

The second half saw Lukaku introduced and Mourinho saw some minor improvements.

Marcus Rashford and Alexis Sanchez combined and the England international forced a strong save out of Thibaut Courtois.

Sanchez thought he'd scored an equaliser around half an hour before the end when he tapped home a parried Nemanja Matic header, but the offside flag was correctly raised.

Manchester United then ran out of ideas and the Blues were able to keep possession expertly in the corner for the final five minutes of play.

Conte's game-plan had worked perfectly, and whether or not the Italian coach remains in place is as yet unclear, however, he's masterminded yet another success and won his first domestic cup in the process.

Saturday's victory brings to a positive end a dismal campaign for the London club, but for Mourinho and Co., many of the issues which plagued the club throughout the year were present at Wembley and there is serious work to be done in the summer in key positions.