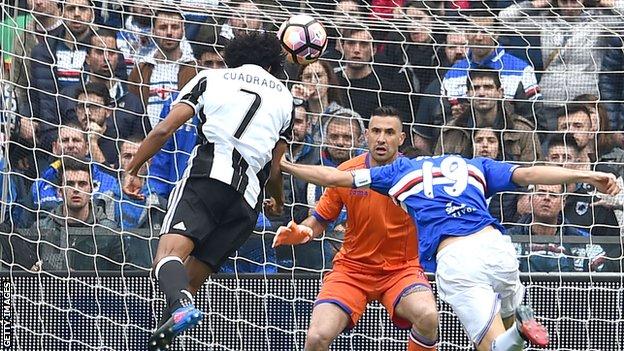 Juan Cuadrado's early header gave Juventus a narrow win over Sampdoria as the champions went 10 points clear at the top of Serie A. The Colombia winger, who is on a three-year loan from Chelsea, met Kwadwo Asamoah's seventh-minute cross with a diving header. The only negative for Juventus was a first-half injury to Argentina forward Paulo Dybala. Earlier, Napoli moved up to second with a 3-2 win over Empoli. Lorenzo Insigne scored twice as Napoli went 3-0 up before surviving a late comeback to move a point ahead of Roma, who host Sassuolo in Sunday's late game.