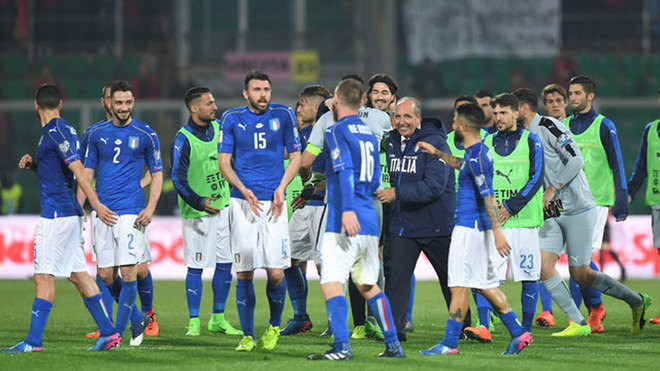 Italy survived some first-half scares on the way to a 2-0 win over Albania in a World Cup qualifier marred by crowd trouble caused by away fans on Friday.A Daniele De Rossi penalty and Ciro Immobile header gave Italy three points in Group G as their veteran goalkeeper Gianluigi Buffon made his 1,000th senior appearance. De Rossi had to wait to take his penalty when two firecrackers were thrown onto the pitch by Albania fans behind the goal.
The match was then interrupted for nearly 10 minutes in the second half as Albania fans set up more firecrackers, creating a cloud of smoke over Buffon's penalty area. The match resumed after the Albania players appealed to their supporters for calm.
Italy are level on 13 points with Spain at the top of the group although their rivals lead on goal difference.
Albania's defeat left them with six points and further dented their hopes of a first-ever World Cup finals appearance.
"We didn't settle quickly enough but after the 30th minute, Buffon didn't have anything to do," said Italy coach Giampiero Ventura."It was not an extraordinarily exciting performance tonight but we have taken another small step forward."
The visitors nearly grabbed a first-minute lead when Sokol Cikalleshi shot across the face of goal while Odise Roshi was not far wide with a long-range effort.
It was a hair-raising start for Italy but they survived to take a 12th minute lead when Andrea Belotti was pushed by Migjen Basha in the area and De Rossi, undisturbed by the firecrackers, converted confidently.
Albania continued to look threatening and Roshi got clear of his marker but shot weakly at Buffon, the only save the 39-year-old had to make in his landmark game.
The Russian-based midfielder had another chance just before halftime when the ball came to him in the penalty area but he curled his shot over the bar.
Italy took a firmer grip on the game after the interruption and Antonio Candreva was denied on the hour when Albania's debutant goalkeeper Thomas Strakosha saved at his feet.
Immobile wrapped up the points when he met Davide Zappacosta's long, looping cross with a firm header at the far post to in the 71st minute.
Albania coach Gianni De Biasi said he was "really upset" about the firework incidents.
"I saw a different side to the Albanian fans, something I hadn't seen in my years here," said the Italian. "It... hurt to see those scenes and I never thought I'd see that from the Albanian supporters."