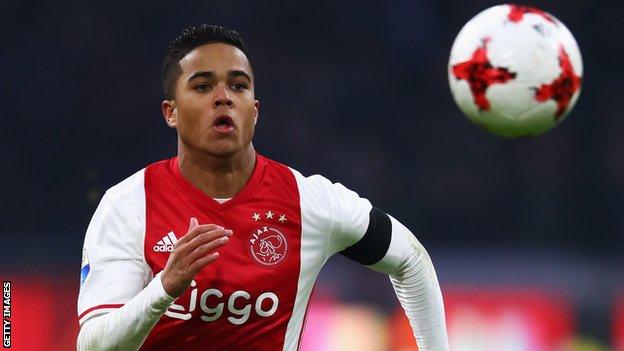 Justin Kluivert, the 17-year-old son of former Netherlands striker Patrick, has scored his first goal for Ajax as they drew with Excelsior in the Eredivisie. Kenny Tete scored an own goal, before Kluivert, who made his Ajax debut in January, tapped in a 32nd-minute equaliser. Kluivert Sr was 18 years and 58 days when he scored his first Ajax goal. He was at Ajax between 1994 and 1997, winning two Dutch Eredivisie titles and the Champions League.

He scored 39 goals in 70 appearances for the Amsterdam club, before going on to play for AC Milan and Barcelona in a 14-year career. The 40-year-old is now director of football at French champions Paris St-Germain. Kluivert Jr, a winger, came through the Ajax academy and has represented the Netherlands at various age groups.