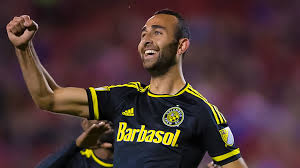 Iraq wants United States-born striker Justin Meram to rethink his decision not to join up with the squad for their upcoming World Cup qualifier against Saudi Arabia. The Columbus Crew midfielder has turned down an international call-up due to fears over complications from the United States’ latest travel ban. Meram was born in Michigan but has represented Iraq internationally since 2014. He has dual citizenship through his parents who were both born in Iraq. Although Iraq was one of seven countries on the Trump administration’s original travel ban, it was left off the revised ban. But despite that, Meram has still opted against representing Iraq in qualifiers against Australia this Thursday and Saudi Arabia next week. With Iraq currently not permitted to host qualifiers because of the security situation there, it is playing games in neighbouring Iran, which is on the new US travel ban list.

Officials at the Iraq FA hope Meram will change his mind and travel to Jeddah for the game on March 28. “We talked to the team’s head coach in this regard two days ago,” a team spokesman told Reuters. Iraq are trying to qualify for the World Cup finals for the first time since 1986 but have picked up just one win in their opening five games and are in fourth place in their group. “The current FIFA sanctions that do not allow the Iraq National Team to play home matches in our country hurts us in so many ways,” Meram wrote on Instagram. “Specifically, we lose all the passion and support that we receive when we play in front of our amazing fans in Iraq. “I wish I wasn’t in this situation. I’d love nothing more than to be there alongside my teammates in the upcoming games, but for reasons outside of my control, I will not be participating in the upcoming World Cup Qualifiers.”