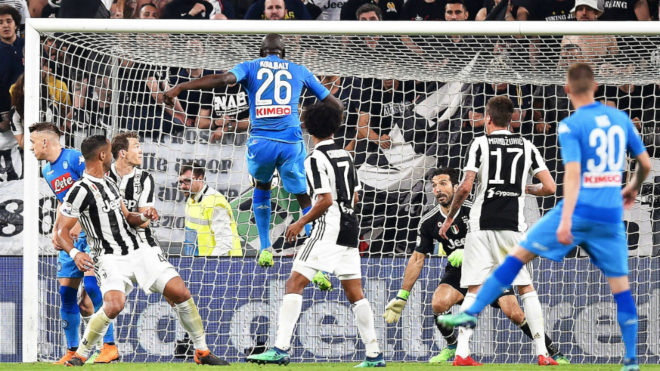 Juventus thought they'd done enough to all but secure another Serie A title, however Napoli managed to blow the title race wide open with a priceless late victory in Turin.

Maurizio Sarri's charges arrived at Sunday's match four points behind the defending champions, in the knowledge that only a victory would realistically keep their title hopes alive.

Massimiliano Allegri has been the subject of intense speculation throughout the week over his future, and the Italian coach appeared to set his team up in a cautious manner on Sunday evening.

The intention was to remain defensively solid and frustrate a vibrant Napoli side, however these efforts were dealt a serious blow when Giorgio Chiellini was forced off through injury after less than 10 minutes of play.

Napoli dominated much of the match and retained possession, but just couldn't find the final pass to break down a resolute Juventus defence. Lorenzo Insigne and Jose Callejon were frustrated by a lack of support from those around them, with Gianluigi Buffon only really having to deal with half-chances over the course of the match.

Paulo Dybala and Gonzalo Higuain were barely involved as the hosts only really looked to hold onto the draw. A deflected free-kick struck Pepe Reina's far post in the first half, suggesting that fortune was indeed on the side of Sarri's team.

With Buffon keeping Callejon and Piotr Zielinski at bay, the decisive moment was to come in the 89th minute of play. The Spaniard delivered a perfect corner into the middle of the penalty area with Kalidou Koulibaly powering a header into the Juventus net.

Wild celebrations ensued at the full time whistle, with the dramatic result leaving Juventus just one point clear of their rivals with four matches left to play. The title is still in the Bianconeri's hands, but it must be remembered that they face an incredibly difficult task when they travel to Milan to face Inter in the Derby d'Italia on Saturday.