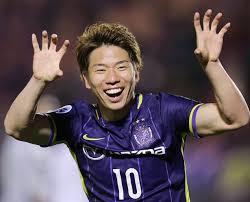 New Arsenal signing Takuma Asano has failed to secure a work permit to play in England, Arsene Wenger has confirmed.
The 21-year-old, who joined the Gunners from Sanfrecce Hiroshima, will now have to be loaned out before making a renewed application next summer.
Asano is one of only three players Wenger has signed this summer and had been set to compete for a place in the first-team squad after impressing for Japan at the Olympic