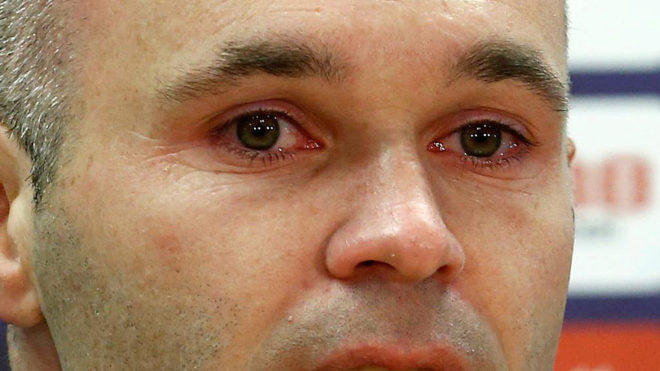 Yesterday was a special day for Andres Iniesta, as he officially bids farewell to Barcelona. The player announced he was leaving at the end of the season at 13.30 CET, with tears streaming down his face.

"This press conference is to make public the decision that this season is my last season here," he began. "It's been a very tough but thoughtful decision.

"After 22 years here I know what it means to be a Barcelona player, the best team in the world for me. "If I had imagined finishing my career here, it would have needed to have been this way: feeling useful, important and as a starter.

"It's a very difficult day for me because I've been here all my life and say to goodbye, it's complicated. "I wouldn't forgive myself for living an uncomfortable situation here because I don't deserve it and neither do the club.

"I want to thank the club and La Masia for all they have given me because I am what I am in part because of them. "I thank my colleagues, all the people that I worked with every day for all these years.

"They are the ones who make me better, as well as all the fans who have given me their love, my parents, my sister... 22 years ago we came in a car and today they are here with me again.

"I am here with the most wonderful person I have ever met in my life and who makes me happy every day, my wife. "Together we have these three treasures [children] that is the most important of all

"Thank you very much to everyone."

Sixteen of his 22 years were spent in the first team, and the announcement brings an end to an extraordinary career that has earned him all possible titles at his club.

Only the Ballon d'Or is missing and even France Football apologised this week for not awarding him one.

Iniesta will finish the season at Barcelona and will have time to win one more league title, likely to be confirmed on Sunday at the Estadio Riazor. Then he will play the World Cup in Russia, which will also be his last games for the Spanish national team.