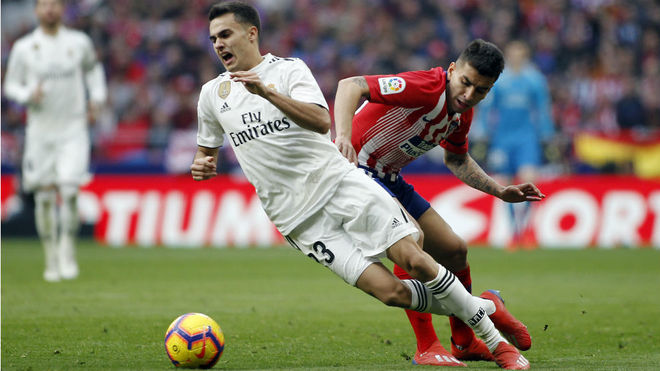 Real Madrid left-back, Sergio Reguilon, has reacted to reports linking him with a transfer move to Chelsea this summer.
Reguilon, who is currently on loan at Sevilla from Madrid, insisted that his only focus is on Sevilla’s Europa League campaign, which begins on Thursday night against AS Roma.
The Spain star has enjoyed an excellent season on loan from Sevilla and has attracted the attention of Chelsea manager, Frank Lampard, who is eager to bring in a new left-back this summer transfer window.
Talks between Chelsea and Real Madrid over a £22.5million deal are reportedly at an “advanced stage”, with the 23-year-old seen as a cheaper alternative to Leicester City’s Ben Chilwell.
Asked about interest from Chelsea, Reguilon told Marca: “If my year at Sevilla had not been good, then this would not be happening. These teams would not ring.
“If I am fine, the team is fine, and the club is fine, everyone is happy.
“But I do not think about these possibilities now – I’m sorry if that sounds like a cliche.
“I’ve been saying since quarantine that until the season isn’t over, I won’t be talking about my future.
“Until then, it would be unfair on me, my teammates and club.
“I have no complaints about anything about the city, the club, my colleagues. I feel very loved. Who knows what will happen in the future.”