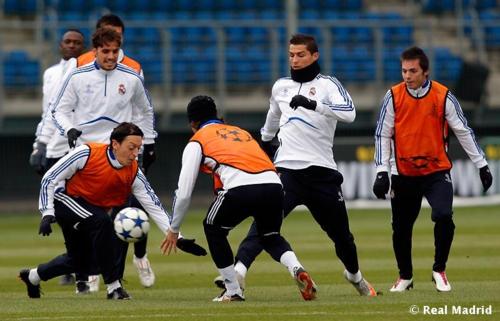 Mohamed Salah has received high praise from former Real Madrid striker Ronaldo Nazario, who has likened him to Lionel Messi. Ronaldo even responded to a quote from Salah in which the Egyptian spoke of how the Brazilian was one of his own idols growing up.

"With Liverpool, I love Salah, he's an incredible player with a tremendous quality and I think he is very similar to Messi," Ronaldo told Cope's 'El Partidazo' programme. "I recently read him say that I was his inspiration and I was very excited and happy to see that."

Although the retired striker won't be attending the final as he enjoys a break in Ibiza, he will be tuning in as an interested observer. While he wouldn't give a guess on what Zinedine Zidane's starting line-up in Kiev will be, he did share a final score prediction and his thoughts on Liverpool's threat.

"I think the result will be 3-2 to Madrid and, if they win the final, it will be an unprecedented event in the club's history," he said. "There were doubts during the year, but I'm very optimistic about the chance to achieve something historic. "I don't care who plays in the starting XI. "[Gareth] Bale appears to be in danger of missing out, but he played well at the end of the season and there are many options like Isco and [Marco] Asensio."

Ronaldo is one of the men to have crossed the Clasico divide in his career and he believes if Neymar has the chance to follow suit, he should take it.

"Cristiano Ronaldo and Neymar are compatible together, they are two good players who would be better together than in separate teams," he added. "If Neymar decides at some point that he wants to leave [PSG] then Real Madrid should take care to bring him in. "Once a player decides to leave, nobody can stop it. "It happened to me, but I don't know if it is a similar situation."

When it comes to the World Cup, which Ronaldo won with Brazil in 2002, he believes that it will be Spain who pose the biggest threat to his country getting their hands back on the trophy.

"The Germans are very strong but Spain are a great team because they are so aggressive, compact and fast," the former Inter star said. "They are Brazil's biggest rival for the World Cup, which I'll be there for working with FIFA and Brazilian TV." The World Cup in Russia begins on June 14.