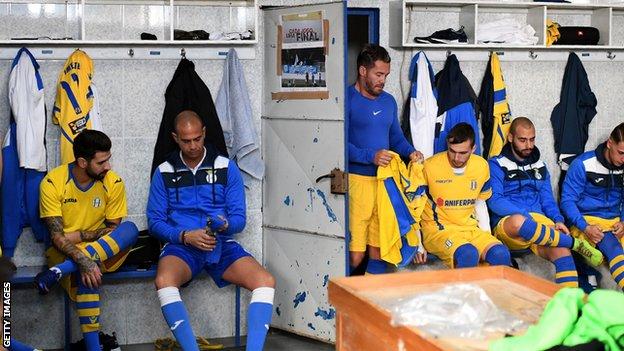 England's all-time leading goalscorer Wayne Rooney will continue to captain the side under new manager Sam Allardyce.
And the 30-year-old Manchester United forward is poised to become England's most-capped outfield player when he leads the side out on Sunday in Slovakia.
That would take him to 116 caps, one more than David Beckham, and behind just goalkeeper Peter Shilton (125) in the all-time list.
Allardyce was appointed after England crashed out of Euro 2016 at the round-of-16 stage, having suffered a shock 2-1 defeat at the hands of Iceland.
Manager Roy Hodgson departed after the loss but Allardyce has decided that there is no need for a change of captain as well.
Allardyce says Rooney is hugely respected by his England team mates
"Wayne has been an excellent captain for England and the manner in which he has fulfilled the role made it an easy decision for me to ask him to continue," said Allardyce.
"Wayne's record speaks for itself. He is the most senior member of the squad and he is hugely respected by his peers.
"All of these factors point towards him being the right choice to lead the team."
Rooney is expected to speak to the media on Tuesday at St George's Park ahead of this weekend's match in Trnava, which will kick-off England's qualification campaign for the 2018 World Cup in Russia.
He lined up in the England midfield during Euro 2016 and was listed in that position when the squad for Slovakia was announced.
Rooney was replaced by Marcus Rashford as England crashed out of Euro 2016
But Allardyce said at a Monday press conference: "It's not a reflection of where I'm likely to play him.
"Shall we say attacking-midfielder? Or striker? I think Rooney's position has changed at Manchester United and that's where I'll be looking to play him.
"I may consider changing the format of the squad announcement next time, so it says no position."
Rooney made his debut for England at the age of just 17 in 2003 and was named to the UEFA team of the tournament at Euro 2004 the following year.
And he was named captain of the side by Hodgson following Steven Gerrard's retirement from international football in the wake of the 2014 World Cup.
Rooney became England's all-time leading goalscorer last September. Rooney became England's all-time top scorer when he converted a penalty against Switzerland last September and his goal in the loss to Iceland was his 53rd at international level.
However, that defeat was one of a series of disappointments Rooney has suffered at major tournaments with England, which include a red card during the 2006 World Cup quarter final against Portugal, who eventually progressed after a penalty shoot-out.