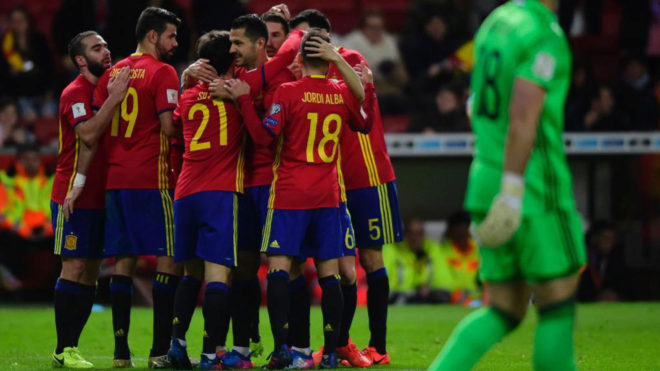 The Spanish national team comfortably collected another three points in UEFA World Cup Qualifying for Russia 2018 with a 4-1 victory over Israel on Friday night at El Molinon in Gijon.
The win keeps Spain atop Group G with 13 points and ahead of second place Italy on goal difference.
David Silva opened the scoring, followed by a Vitolo goal right before half-time, before Diego Costa tallied with an early second-half header and Isco notched the fourth just minutes before full-time.
There were several notable performances from La Roja on the day, including Jordi Alba, whose runs down the left flank caused all sorts of headaches for Israel. Silva's cutting edge combined with Andrea Iniesta's exquisite passing and playmaking all made for a very solid performance from Julen Lopetegui's team.The big news in Lopetegui's starting XI was Thiago getting the nod in midfield ahead of Koke, as the Bayern Munich man joined Sergio Busquets and Iniesta in the centre of the pitch.
There was also the return of Diego Costa up top at striker, along with Silva and Vitolo. Frenemies Sergio Ramos and Gerard Pique anchored the back line at centre-back, along with another Real Madrid/Barcelona split at full-back in the form of Dani Carvajal and Alba, while David De Gea was stationed in goal.
Spain had a very crisp start in attack and if not for the fingertips of Israel goalkeeper Marciano, Thiago would have scored on a rocket from about 30 yards out. Instead the ball thundered off the crossbar and eventually out of play. In defence things looked a bit shakier.
Twice, Israel forward Zahavi was in on goal inside the first 10 minutes only to be let down by poor finishing.Israel were playing narrowly, thus forcing Lopetegui's men out wide, and quickly Spain caught on by using the diagonal pass to try to split open the Israeli defence.
The visitors did not help themselves out by giving away the ball a few times and one such occasion resulted in the Spanish opener. After dispossessing, a ball was played out wide left to Alba, who found Silva in a pocket of space in the Israeli defence, and the Manchester City man whipped a quick left-footed shot past Marciano to put Spain on top 1-0.Spain's superiority in possession had Israel playing a game in chase, with Iniesta serving as the conductor and using a series of flicks and tricks to keep the visitors guessing.La Roja were by far the more dominant side, but the score still stood at 1-0 in the final stages of the first-half.
Israel displayed a much more comfortable and confident football, capped by a chance when Rafaelov forced De Gea into a sprawling save on a header off a superb cross from Zahavi.
However, any momentum that Israel were building came to screeching halt on the brink of half-time when an error from Marciano allowed Spain to score a second. Thiago slipped in a pass to Vitolo, who hit a shot that should have been saved, but ended up trickling past Marciano and into goal to make it 2-0.
Spain were strong at the start of the second half and Costa should have made it three just minutes after the re-start, but he directed a header wide off a cross from Carvajal. The Chelsea man made up for his miss though, and minutes later a Thiago corner kick was smacked in by Costa to give Spain a 3-0 lead and all but seal the three points for the hosts.
With the three-goal cushion, Spain's football really began to flow, evidenced by a Costa header nodded right into Silva path that the he struck off the post.
To their credit, Israel never threw in the tower and they picked up a consolation goal with a quarter-hour left as Refaelov's header got the better of De Gea to cut the lead to 3-1.
Spain were keen to avoid any late drama put the match to bed just minutes before full-time when substitute Isco rolled in a shot just inside the near post to complete the 4-1 scoreline.
Spain return to action on Tuesday in a friendly versus France.