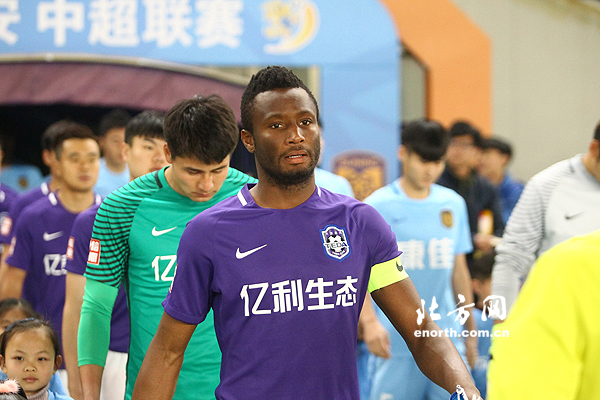 Tianjin TEDA coach Jaime Pacheo has praised Nigeria midfielder Mikel Obi who featured as a centre-back in Friday's Chinese Super League draw against Jiangsu Suning, reports Completesportsnigeria.com. Mikel made his second appearance in the Chinese Super League, partnering Pan Xi Ming in central defence as Tianjin TEDA recorded their first point of the season. "Mikel is not a central defender, but he was willing to help the team," Pacheo, a former Portuguese international, told sports.enorth.com.cn. "Before the game I had a personal conversation with him (Mikel) and he said he can play in the position, which was very good for us.”He had a very good performance; his partnership with Pan Xi Ming in the center-back gave no chance to Jiangsu Suning. "He showed with his quality on how well the role should be played especially how he communicated with his teammates."

Pacheo also believes Brown Ideye will be a big hit for the club after the Nigeria striker made his CSL debut in Friday's draw. "Brown has been in the game before, so his state is still good, he is a player that will adjust well with his teammates with time, so I believe that he will be better in the next game," Pacheo toldsports.enorth.com.cn. Tianjin Teda are now 11th in the CSL table with just one point. They face Chongqing Lifan in their next game on the 2 April.