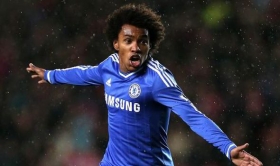 West Ham winger Michail Antonio has withdrawn from the England squad because of a hamstring injury. The uncapped 26-year-old reported the injury after Saturday's 3-2 Premier League defeat by Leicester City. Antonio was able to complete the 90 minutes at London Stadium, but West Ham manager Slaven Bilic indicated afterwards that he was a doubt. England faces Germany in a friendly on Wednesday before hosting Lithuania in a World Cup qualifier on Sunday. Antonio's absence further weakens the attacking options of England boss Gareth Southgate.

Forwards Harry Kane, Daniel Sturridge, Danny Welbeck and Wayne Rooney are all out through injury, while Theo Walcott was left out of the squad. In addition to Antonio, West Ham lost centre-back Winston Reid to a leg injury, while midfielder Pedro Obiang was taken off on a stretcher after rolling his ankle. On the injuries to Antonio and Reid, Bilic said: "Hopefully, they will be fit after the international break."